- September 10, 2010
I never thought I would have as much fun as I've been having with the Star Mazda at Phoenix. Tonights race was with the middle split, so the strength of field was much higher than last nights race. After the usual spins and cautions in the first half of the race I settled into a nice groove with a bunch of guys who were real polite and considerate racers. It was a pleasure to have real close racing with them. Going into turn 1 at Phoenix less than two tenths behind the guy in front, top gear and without lifting at 145mph is a real adrenaline rush.

I started at the back of the pack in 17th, but ended up finshing 7th under a 69th lap caution. Absolutely fantastic race and really makes me want to spend more time in the Late Model and get my oval license up past D.

Popular posts from this blog 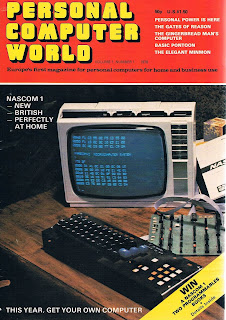 A few years ago I inherited a couple of binders full of old computer magazines from my father-in-law. He was a radio HAM and was a keen computer enthusiast back in his day. What I found inside the binders were the first 20 issues of the UK computing magazine Personal Computer World... in mint condition. In an effort to save these magazines from the ravages of time I'm going to scan them in and put them on here. This first post contains issue 1 from February 1978. If anyone finds this useful and would like me to scan the rest of them in please get in touch... from what I can tell this stuff isn't available anywhere else on the internet. My aim here isn't to abuse copyright or annoy anyone who was involved in the magazine... I'm putting this stuff here because it is important historical documentation about the birth of home computing. If anyone has any copyright issues please get in touch. Enjoy...
Read more

- August 18, 2018
I've started looking at Rust again. I had a quick try of rust about 18 months ago when I was looking at modern alternatives to C++. At that time I learned a bit of Rust and also some Go. Both languages impressed me but to be honest I liked the feel of Go more... mainly because it was simpler to learn. Time has passed and my mind has wondered back to Rust. This page is a scrap book of thoughts about Rust during my first week back. Things I like about Rust... Built-in a build system (cargo) Immutable by default Explicit data ownership semantics Built-in documentation about the language and compiler errors Sensible type inference External module dependency versioning makes sense No implicit bool conversion Descriptive error reporting Tuples ! Things I'm not sure about... note I'm not saying these things are bad... just that I'm unconvinced at this point Allowing variable type changes via shadowing Progress reading 'The Rust Book' - 6.1 Definin
Read more

- September 08, 2010
This is a test - Posted using BlogPress from my iPhone
Read more